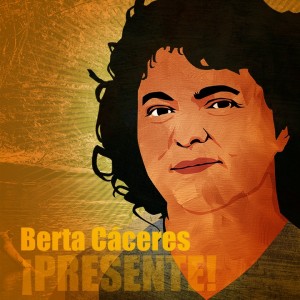 On Thursday, March 3rd, at 1 am CST, Berta Cáceres, a Lenca Indigenous woman and an internationally recognized leader, was assassinated in her home. Berta was supposed to be under special protection by the local authorities because of the innumerable death threats that she received. As General Coordinator of the Civic Council of Grassroots and Indigenous Organizations of Honduras (COPINH), Berta Cáceres was an organizer working at the frontlines in the struggle against the expropriation of land and water from her community by the construction of the Agua Zarca hydropower dam project in the Gualcarque River basin, promoted by the company Desarrollos Energéticos S.A. (DESA) and financed by foreign investors.

She was a courageous voice in defense of Lenca communities and the struggle for the rights of people and of Mother Earth.  During her 2015 Goldman Environmental Prize Award ceremony, Berta shared these words:

“In our worldview, we are beings who come from the Earth, from the water, and from corn. The Lenca people are ancestral guardians of the rivers, in turn protected by the spirits of young girls, who teach us that giving our lives in various ways for the protection of the rivers is giving our lives for the well-being of humanity and of this planet… Let us wake up! We’re out of time. WE must shake our conscience free of the rapacious capitalism, racism and patriarchy that will only assure our own self-destruction.

“Our Mother Earth – militarized, fenced-in, poisoned, a place where basic rights are systematically violated – demands that we take action.”

The atrocious crime happened just three months shy of the seventh anniversary of the coup d’état that devastated Honduras and had rippling effects across the American continent. In the first year of the coup, 43 people were killed – half of them were trade union members. Since 2009, there have been over 100 organizers killed, many of them Indigenous Peoples and small scale farmers engaged in nonviolent struggles for land and territory, including Tomás Garcia of COPINH and Margarita Murillo of La Vía Campesina Honduras. Thousands of people left the country, a place considered one of the most unsafe places on Earth. Unaccompanied children travelled alone to find safety in the US, only to be held in makeshift warehouses and deported back to the very place they had fled. At the same, the Inter-American Commission on Human Rights of the Organization for the American States reports that children from 5 to 23 years are receiving military training in Honduras. 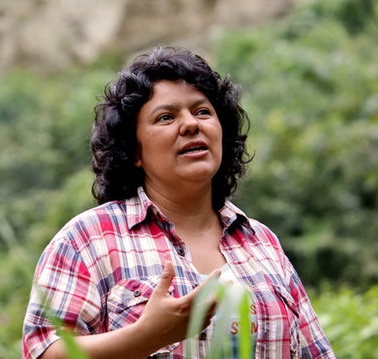 The murder of Berta Cáceres is a direct result of the ill-advised US policies for Latin America. It is past time for the US government to recognize that the financial and political support it has provided to the 2009 military coup and to the current Honduran government only fuels abuses by military personnel and the role of death squads against journalists, students and organizers, especially those at the forefront of defending land, territory, and natural resources.   Berta had warned that DESA was once again invading Lenca territories, this time accompanied by private and public armed forces, including the military police called “Tigres” – trained and financed by the United States.  Furthermore, the U.S. Agency for International Development (USAID) is directly supporting the Agua Zarca project through the USAID MERCADO program.

Besides Berta, other leaders from trade unions and peasant, Indigenous and Afro-descendent organizations are frequent targets of death threats.Currently, the Honduran authorities are holding one member of COPINH and an international ally Gustavo Castro as part of the criminal investigation in a clear attempt to criminalize the victims of Berta’s assassination. We ask friends and allies to participate in local actions to demand a prompt and full independent investigation into the killing of Berta Cáceres, by the Inter American Human Rights Commission. We call on everyone determined to uphold human rights to immediately contact their congressional representatives, advise them that the US support to Honduras and to the Agua Zarca hydroelectric dam project is destroying democratic rule in Honduras and killing innocent people, and demand an immediate end to such support.

Finally, we support the rightful demands of COPINH and of all Indigenous communities to protect and defend their lands and to prevent unwanted megaprojects in their territory, starting with the Agua Zarca dam project on the sacred Gualcarque River.

Next Monday, March 14 is International Day of Action Against Dams and for Rivers, Water, and Life. Around the country and around the world, organizations will be taking action in tribute to the powerful work Berta Cáceres led to protect the Gualcarque River, and in solidarity with the ongoing work of COPINH and of other movements in defense of water rights around the world. We dedicate ourselves to these struggles.

“For decades, Berta Caceres gave everything she had to the causes of true democracy; indigenous power; protection of the earth, the forests, the rivers; rights of women and LGBT individuals; and an end of tyranny by the US government, transnational capital, and Honduran oligarchy. Berta advanced these agendas not only in Honduras, but globally – most recently even in an audience with the Pope. Now, the one thing she did not freely give has been taken from her: her very life. But she is not gone; she lives on in all of us who continue to believe in and work for a just, humane, and ecologically safe world.” – Beverly Bell, Other Worlds

“The assassination of Berta Caceres is a tremendous loss to us, and to all communities who seek justice and dignity. And her murder is an indictment on an insatiable and immoral system – supported by US policies since the 2009 coup – that grabs ancestral lands from indigenous communities, poisons and privatizes waterways and seeks profit above all else.  She stood courageously in the face of mounting threats, knowing the dangers, and with love in her heart, organized to protect the lands and waters of the Lenca people. We mourn with and call on the international community to take action, to bring justice for Berta and to work to continue her legacy.” – Chung-Wha Hong, Grassroots International

¨A Honduran friend who recognizes his Lenca ancestry called me today and declared:  They have killed Lempira again. They killed the person carrying the banner of Indigenous Dignity the Highest, Berta Caceres.  Lempira was the Lenca leader killed by the Spanish at the time of conquest.  I agree:  On March 3, 2016 Lempira Was Killed Again.  I mourn for our collective loss and the loss of a beautiful, inspirational sister of supreme struggle.¨ – Stephen Bartlett, Agricultural Missions

“Berta was a tenacious leader. She worked tirelessly to bring indigenous and peasant families into international alliances to contain the greed of international capital for local resources. Above all, Berta was a dear friend and a sister in the struggle for many people in Central America and beyond. The loss of Berta Caceres is now our mística, the energy that will unify us and will sustain our struggle for a more just society.” – Saulo Araujo, WhyHunger

”At Grassroots Global Justice Alliance we are saddened and enraged by the murder of our compañera Berta. She stood up fiercely against her government and trans-national corporations, but always grounded in her love for people and the land.  We will continue to live up to the example that she set to fight for land, for life, for dignity, and for happiness!   The US government is as much responsible for her death as the people who invaded her home.  We will not forget the fights Berta has been engaged in, Let’s channel her strength and her courage to continue her legacy.” – Cindy Wiesner on behalf of Grassroots Global Justice Alliance

“We are deeply saddened by the death of this courageous leader. Her assassination is another horrific example of the violence against environmental activists and the criminalization of people, particularly women and indigenous peoples, around the world who are fighting to protect basic rights to water, land, forests, and life. May Berta’s blood bring strength and determination to her immediate family, comrades, and all of us.” – Terry Odendahl and Nnimmo Bassey, Global Greengrants Fund

“The terrible news of the assassination of Berta Cáceres, internationally recognized human rights defender and Lenca indigenous leader, leaves us shocked and saddened, but determined to continue the fight she so boldly led. She was an inspirational example of how the defense of land and territory, and indigenous and women’s rights, can and must be taken up together. We join the call for an independent investigation and immediate suspension of US security aid that has fomented the militarization and post-coup abandonment of human rights in Honduras.” – Laura Carlsen, CIP Americas Program