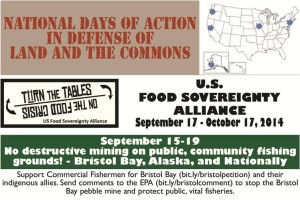 ACTION AS AN INDIVIDUAL: Sign this petition, put together by Commercial Fishermen for Bristol Bay. Then share it with your friends. Don’t forget: the deadline is this Friday, September 19, at midnight EST / 8:00 pm Alaska time

ACTION AS AN ORGANIZATION: You can make a strong statement by submitting public comment on behalf of your organization or business. Go to this link to customize and submit a letter (see sample below from Stephen Bartlett).

In our efforts to elevate frontline community struggles and to advance food sovereignty, one immediate action opportunity is in SUPPORT OF THE BRISTOL BAY, ALASKA COMMUNITY, who are BATTLING A PROPOSED PEBBLE MINE that would DESTROY PRISTINE FISH AND ECOLOGICAL HABITAT, which thousands of commercial fishermen and indigenous people depend upon. The communities need people across the US to write to the Environmental Protection Agency and tell them NOT TO EXTEND A PERMIT FOR THE MINE. After a decade-long campaign, this SEPTEMBER 19th will be a critical milestone in Bristol Bay’s march toward victory. Here’s how you can take action:

SAMPLE LETTER FROM USFSA IN SUPPORT OF BRISTOL BAY

“To the EPA officials and general public:  I would like to assert my strong belief that we must do all we can to protect our natural environment, so that humanity will be able to survive on this planet into the future.  With the challenges of environmental degradation and continued destruction of the common goods of nature (in ordinary speech called “resources”), we must think clearly and act with a vision of future generations as well as the present generation.  The EPA has called for strong restrictions on the kinds and extent of mining that can take place in Bristol Bay, Alaska.  This is good news.   Their analysis describes the pristine state of the fisheries and general ecology of Bristol Bay, which is becoming more and more rare in our continent.   The Pebble Mine project as originally conceived would doom a very important salmon fishery, upon which many if not most of the inhabitants of that area rely upon or benefit from.    in addition, the entire ecological balance would be threatened and destroyed by the kind of mining proposed, with massive open pit practices in search of metals, with contaminated tailings, and with all the associated industrial activity this would require.  I fully agree that this mine should be banned from Bristol bay, in favor of the 11,000 people who make a living from commercial fishing in Bristol Bay.  This bay full of life and the entire watershed, if protected, can provide life, livelihood and high quality food, for generations to come.  There is no price that can compensate or pay for the loss of such natural ecological services.

Days of Action: Purpose and Objectives

The Land and Resource Grabs and Reform work team of the U.S. Food Sovereignty Alliance (USFSA) helped organize a National Days of Action in order to raise the profile of grassroots organizations working for community control over land and resources for food sovereignty and justice.

The National Days of Action will:

1) Raise up frontline communities and community-based organizations that are fighting back in creative and strategic ways by supporting 3-4 strategic and local actions around the country focused on advancing the struggle for food sovereignty and food justice around community control of land and resources.

2) Put pressure on stakeholders, and build community power to meet community needs for increased access to land and resources and to halt existing land and ocean grabbing that threatens communities and families, through a strategic action organized and led by frontline organizations in the community to gain publicity.

3) Raise the profile of community control of land and ocean in the conversation around food justice, and raise the alarm about land + ocean grabbing in the US – farmland for land speculation, fisheries access transforming from public resource to private property, more industrial agriculture + aquaculture, urban sprawl, and gentrification affecting family farmers, family fishers, indigenous communities, and rural and urban communities of color.

4) Raise up awareness of the disproportionate pace of land loss among communities of color.

5) Position the USFSA, its members, and its allies as a key player in coordinating frontline struggles for food justice and food sovereignty, while advancing our position on issues that affect families everyday.