By Edgar Franks, Organizer with Community to Community Development in Bellingham, WA 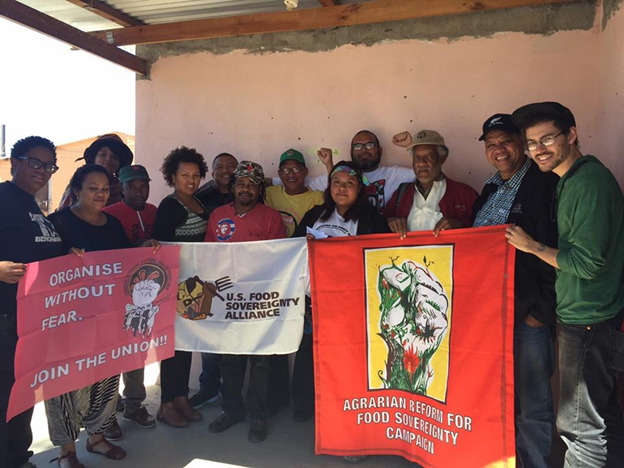 This past October I was part of the delegation sent by the US Food Sovereignty Alliance to South Africa. The delegation is part of a process to connect with groups throughout Africa with US-based Food Sovereignty groups to build an international analysis on the food system and to be in solidarity with one another.
During the 11 days our delegation was in South Africa, we were able to meet with many organizations throughout different regions, each with their unique struggles. Our delegation was small but represented many different sectors within the food system, including farmworkers, Black farmers, and immigrants; we all brought our own area or expertise to the trip and complimented each other well.
Even though every place we visited we learned a lot and were impacted by the amount of work and organizing that was happening, I want to share about the exchange that we had with the farmworkers in Robertson in the Western Cape. 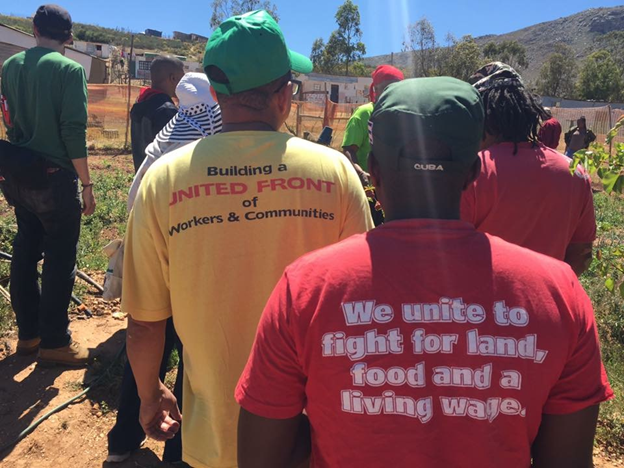 Personally, I was able to connect to the farmworker struggle in the Western Cape, as there was a familiarity with the way issues and conditions were discussed. The analysis that was shared resonated with me profoundly considering that farmworkers here in the United States are also going through the same exploitation.

At Community to Community in Washington, we try to recognize that the struggle for farmworker justice is not limited to the workplace. Farmworkers’ lives are complex and have many intersections which is why we know that in order to achieve our goals – especially when it comes to transforming the food system – that we must go beyond just fighting for union contracts. Food Sovereignty for farmworkers also means being recognized as humans who are capable of leading ourselves. That is why we also organize for immigrant rights, climate justice, women’s rights, and food sovereignty.

In South Africa, farm workers are some of the most marginalized. Conditions in their workplace or community have not changed much. Even as South Africa has transitioned from the apartheid government that had ruled since the late 1940s into a Black led government headed by the African National Congress, economic justice has not reached the farm workers. Even though there are thousands of farmworkers, less than 4% are unionized. Workers face precarious conditions having to deal with labor brokers, abusive supervisors, physical violence, and sexual harassment. These conditions reached a boiling point in 2012 when thousands of workers organized a strike but were then repressed by the police. 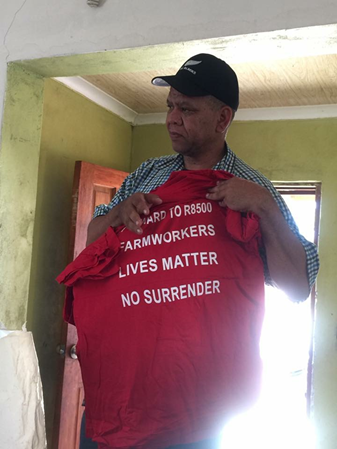 It is under these conditions that The Commercial, Stevedoring, Agricultural and Allied Workers Union (CSAAWU) which has been on the frontlines for over 10 years has had to organize. When the transfer of power occurred, there was an expectation that workers would benefit under a new government that was black led. Instead, only a certain few benefitted. Whereas in the past, farmworkers were hopeful that with the abolition of apartheid, that the government would be able to improve conditions, the condition under this new government remain the same. CSAAWU recognized that organizing with farmworkers needed to be deeper than just organizing in the workplace; they also have to organize in the community to respond to the numerous social inequalities that exist in the lives of farmworkers. The Union also organizes with immigrant workers who come from primarily Mozambique and Zimbabwe and face similar treatment as immigrants here in the United States such as wage theft and human trafficking by labor brokers.

CSAAWU partners with Mawubuye, which is a land rights movement. Recognizing that the path for freedom from exploitation is for farmworkers to have their own land and not have to sell their labor for exploitative wages. There was a period of hope under the new government in 1994 when there were talks to redistribute formerly white owned lands back to black people. The goal was that by 2018 to have 30% of land that was owned by whites to be redistributed back to black people, but currently only 5% of land has been redistributed.

Out of the 2012 farmworker strike there was a list of 23 demands which came out of a series of dialogues. Among the principal concerns is receiving a just wage. The farmworkers are asking for no less than 250 Rand for an 8-hour work day, which is almost equivalent to $16 in the US. Many of the workers are picking oranges for corporations like Dole, and in grape vineyards for wines that are for export to Europe and in some part of the United States. Hardly any of the fruits or vegetables picked are for local markets. 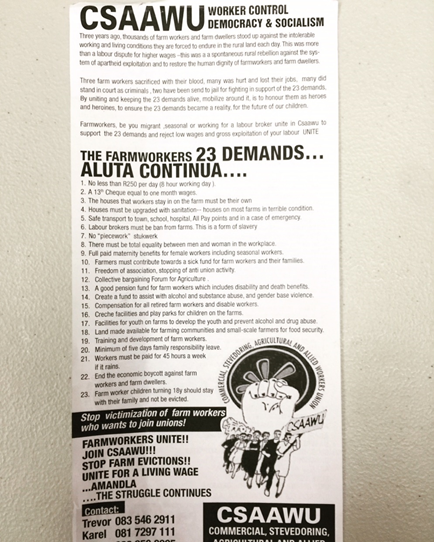 The issue of class was raised as well. From what I gathered from our conversations, in the past when the apartheid government was ruling, farmworkers felt that it was the racist government that was oppressing them. The “Boers” (White Farmers) were protected by the state and anytime workers threatened to organize or strike, they were immediately broken and arrested by the police. When Nelson Mandela became president of South Africa farmworkers felt that they were finally going to get justice. However instead of seeing their conditions improve, the farmworkers saw only the creation of a black and colored middle class that was not too interested in making sure that workers had economic gains. If anything, the black middle class drove a wedge at true solidarity between poor people and the new black leadership. In essence, the middle class was functioning to protect white supremacy by keeping the farmworkers down.

Looking at the list of demands, they are almost exactly the same to the demands of US based farmworkers. Seeing the demands and hearing the stories clearly pointed to how systemic racism and poverty are built in to the agricultural industry. Workers in South Africa and in the US are facing a similar system of oppression. Whether it is getting paid by piece rate or not having kids in the fields, these are the same issues you see at any farm around the world. It is going to take a global farmworkers movement to transform the system and shift it away from the exploitative one that exists right now, to one that is humane and just. Food Sovereignty means that workers get to determine their conditions at work and in their community and that you can’t only have justice at the workplace, that you must also have justice in your community.