The USFSA’s National Days of Action continued with Community 2 Community leading a People’s Movement Assembly on Food Sovereignty at the Pacific Northwest Social Forum, from September 26th to the 28th in Portland, OR. 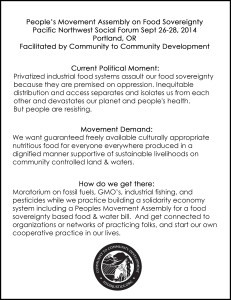 And last week, students at UC Berkeley occupied a school department that has been dedicated to selling off the school’s farmland for development, to continue the defense of food sovereignty of Occupy the Farm.

And the USFSA launched its Days of Action flyer and land and agrarian reform infographic at the People’s Climate March in NYC on September 21st!